You Are Not Me 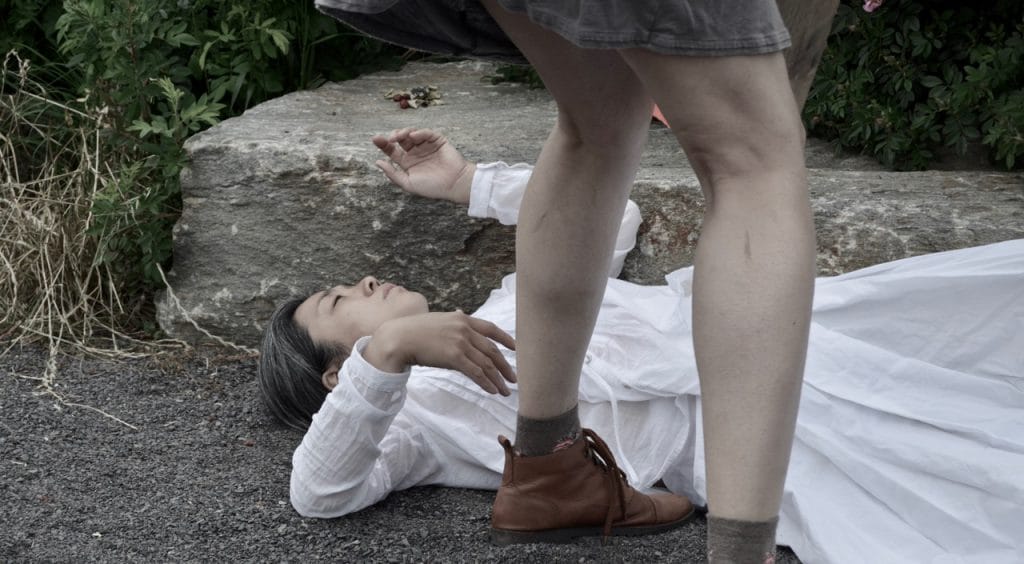 Maiko Matsushima in the Island Score from The Quiet Circus.

I am at The Yard this month, a performance residency center in Chilmark, Massachusetts which is on the sparsely populated end of Martha’s Vineyard. I don’t get cell phone reception but there is Wi-Fi in the rustic house with dancers tucked away in bedrooms with bunk beds on one end and the busy Yard office that has been crammed into an old den on the other side.

I come here every year to support The Schoenberg Fellows who are the artists given a three-week residency to bring their collaborators and make performance. It was here that I first met Sandy Broyard and the citizen dancers of Whats Written Within, an improvisational dance group that is a model for what it looks like to have an ongoing dance practice at any age. Here you will find a twenty-two year old dancing intently with a ninety-two year old in a mutual collaboration of research and revelation.

The Yard is also where Maiko Matsushima and I worked on early versions of the Island Score and The Landscape Game. Its a very special place and the three weeks I spend here every year working with choreographers and dancers in residence are a very special part of my own practice.

Meeting the Interns who are hired every summer at The Yard is part of the joy as I get to witness young people who are smarter, more gracious and more thoughtful than I remember being at their age. Every intern is hired as a citizen artist valued for having both artistic and administrative or production skills. This reflects nearly everyone who is on staff at the Yard. Here, they dance and write press releases, they choreograph and fundraise. Every morning starts with community class in the studios and the interns form the core group before heading off to their administrative and production duties for the day. Although many other people take class too, I designed the classes I am teaching this week with the interns in mind as they begin the long, hard work of the Summer season.

For starters I share a thought with them about the work of wrestling with the unknown, and then I quote choreographer and performance artist Eiko Otake describing her experience as a student of her teacher Kazuo Ohno:

Art is a vital technology of inquiry, just as the scientific method has proved to be a powerful engine of discovery. Artistic practices offer us ways of wrestling with the unknown. If we are able to struggle long enough in the dark then insight may gradually arise. Eiko Otake’s work reminds me that this route takes tremendous courage; that being brave is not a matter of being powerful; and that a meaningful life is full of that struggle. This is Eiko writing about beginning to study with Kazuo Ohno when she was barely 20 years old:
“On my first visit to his studio, I followed the directions Ohno gave me over the phone and was surprised to find him waiting for me at the bottom of the hill. Since then I walked up that slope two evenings a week to his studio. At the time, he had only a handful of students. Ohno would say a few things, show us some pictures time to time, then tell us to improvise for about two hours. No more instruction before, during, or after. The task of continuously facing my own mind in the unheated studio and feeling the limit of my own imagination was so overwhelming that sometimes, upon arriving at the studio, I could not open its door. On such nights, after several minutes of hesitation, I turned around to walk down the hill in darkness.”
∴
With that I invite you to come wrestle with the unknown, the limits of imagination, for beyond the last thought something indeed does arise.

You Are Not Me – Difference as Resource for Dancing and Making.

This 4-class series proposes ways of dancing that locate skillfulness in our ability to engage “the limits of our imagination” (as written by dance artist Eiko Otake of Eiko and Koma) rather than in our ability to recite codified movement vocabularies. We will think through dancing by engaging the panoramic complexity of our brilliant nervous systems. We will explore choreographies that treat our differences— in background, training, ability, identity and experience— as resource for deepening both meaning and skills in a practice of Dance.

Each class will build on the ones before but you may drop in to any class without having attended the previous one(s). There will be times when we write so you may want to bring a notebook though paper and pencil will be provided. If you are wondering if this class is either hard enough or easy enough for you— it is! This class builds on proposals about dance practice and choreography as I see them in the work of Eiko and Koma Otake, and Ishmael Houston Jones, as well as twenty years of working with Amy Smith and Andrew Simonet in our collaboration as Headlong Dance Theater. This class draws on choreographies and practices developed in the extended public art project The Quiet Circus, which was developed in part here at The Yard in residencies between 2014-2016  and included dancing with and learning from the luminous dancers of local group Whats Written Within directed by Sandy Broyard and Sally Cohn. For more context you may be interested in these links: