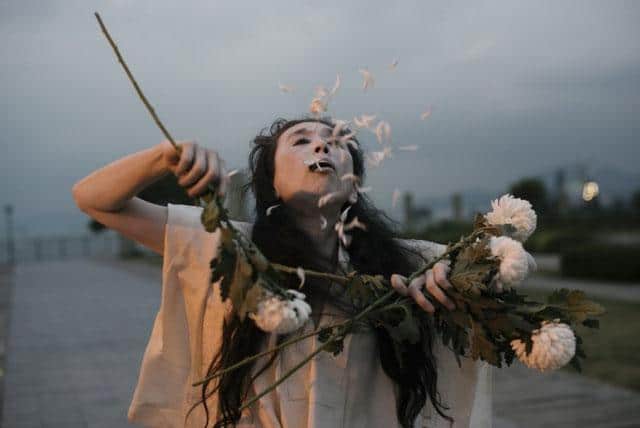 I am writing again about Eiko Otake. If you were lucky enough to see her perform in Philadelphia’s 30th Street Station last year, you know how special the ongoing work, A Body in Places, is. You can read more about Eiko in earlier posts, Eiko Otake and the Politics of Hesitation and Time is Not Even.

Since her performances in Philadelphia, she has continued to bring her startling presence – fragile and strong, remorseful, angry and achingly tender – to places all over the world. The work has grown, and now Eiko is at the center of a platform that is happening for the next few weeks, impeccably curated by Judy Hussie Taylor and Lydia Bell of Danspace Project in New York City. The expansive, elaborate platform is a wonder in its vision of the wildly different ways in which we can gather around the ideas of dance. There are performances for one person, convenings indoors and outdoors, a reading group, performance installations and a movie series. There is a catalogue and blog posts worth reading. There are many other artists performing with and alongside and in relation to Eiko, including two evenings of Talking Duets.

I’d like to share with you something Eiko wrote that touches me deeply. To put it in context I will say that I see art as a vital technology of inquiry, just as the scientific method has proved to be a powerful engine of discovery. Artistic practices offer us ways of wrestling with the unknown. If we are able to struggle long enough in the dark then insight may gradually arise. Eiko’s work reminds me that this route takes tremendous courage; that being brave is not a matter of being powerful; and that a meaningful life is full of that struggle. This is Eiko writing about beginning to study with Kazuo Ohno when she was barely 20 years old:

“On my first visit to his studio, I followed the directions Ohno gave me over the phone and was surprised to find him waiting for me at the bottom of the hill. Since then I walked up that slope two evenings a week to his studio. At the time, he had only a handful of students. Ohno would say a few things, show us some pictures time to time, then tell us to improvise for about two hours. No more instruction before, during, or after. The task of continuously facing my own mind in the unheated studio and feeling the limit of my own imagination was so overwhelming that sometimes, upon arriving at the studio, I could not open its door. On such nights, after several minutes of hesitation, I turned around to walk down the hill in darkness.”

With that I invite you to come wrestle with the unknown, the limits of imagination, for beyond the last thought something indeed does arise.