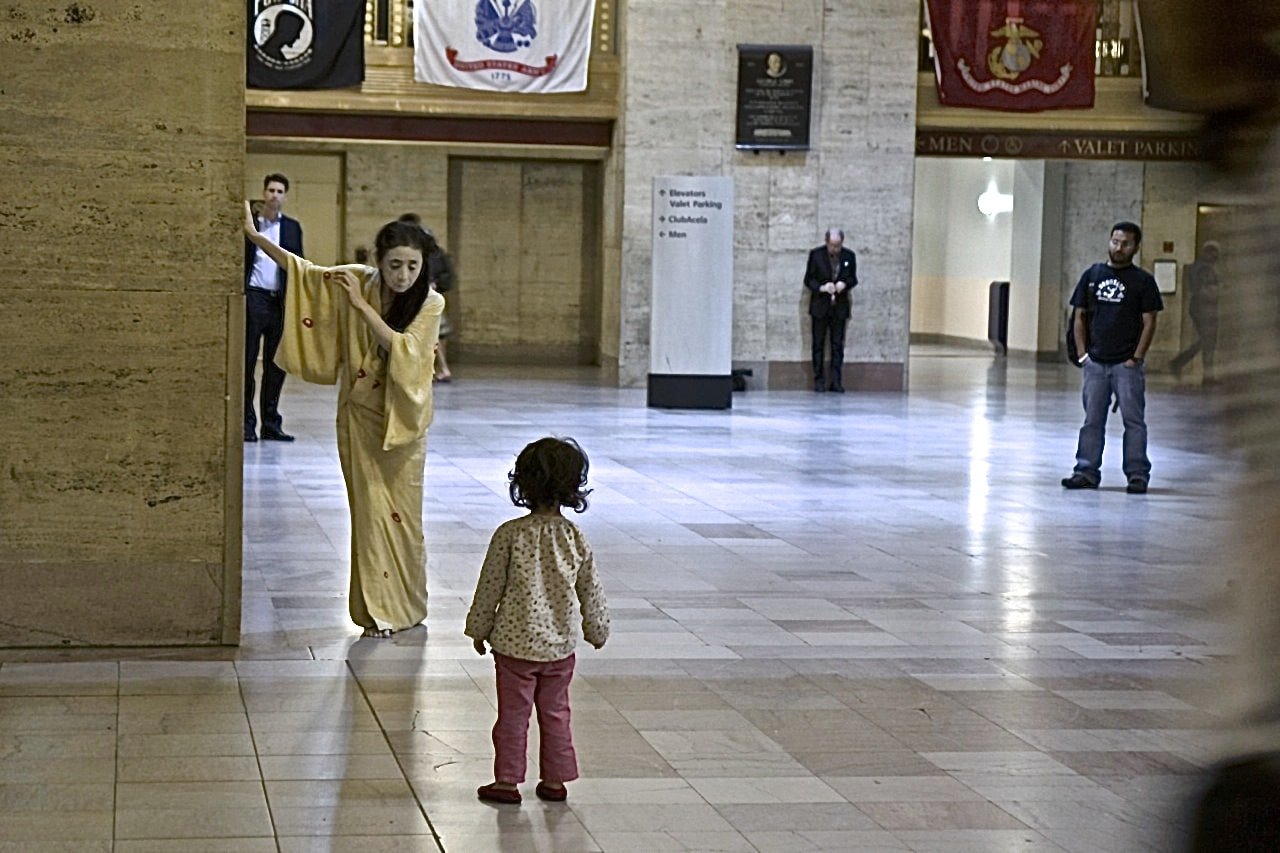 Eiko Otake, A Body in a Station. Photo by William Johnston.

Time is not even.  Welcome to the second letter in a series I am writing about my recent conversations with Eiko Otake, whose last of four performances is tomorrow night, Friday, October 24 from 9pm to midnight at Amtrak’s 30th Street Station in Philadelphia.  It will be a haunting time to observe a rare and indelible performance.  My time with Eiko these past few months has been an extended, ecstatic meditation on what I call the “choreography of presence”- an alternative strand in post-modern dance to the “movement for movement sake’s” path blazed by Merce Cunningham’s work.  Late one night a couple of weeks ago I found myself dizzy with joy as I sat in an empty studio that seemed to float above a glowing Broad Street.  I was with Eiko, who is teaching at University of the Arts whose studio we were in, and Ishmael Houston-Jones who was in town for the week teaching at the Headlong Performance Institute.  The conversation was about presence and gaze and Eiko’s next Friday performance at 30th street station.  I’m still digesting what happened that night and I will write more about it next time.  For now I will tell you that there was a moment while Eiko was talking about the act of seeing in performance when her foot started moving as if totally separate from the rest of her: a small rodent circling round and round in a hole, a pool of quicksand, a hand reaching out of the earth.  Like I said, I’m still digesting! Earlier I wrote about Eiko Otake and the Politics of Hesitation.

For now, time is not even.  In Eiko’s work the feeling of the unevenness of time is intimately connected to a historical sense of failure.  Her out-of-place body haunting the sites in which she dances implicitly says that failure is happening, has already happened, or will happen.  She means to contradict a pervasive, progressive assumption about how history operates.  Her companion piece to A Body in a Station is A Body in Fukushima, in which she dances in the evacuated, radioactive railway stations and landscapes of Fukushima.  Her body in that context points out the human, preventable failures that are the result of hubris, power, and greed- qualities in human society that have not progressed, with devastating repercussions, in the shadow of the atomic age.  “Anger is, and remorse is, a drive” she says.  Her performances in the grandeur of Amtrak’s 30th Street Station are just as much about failure as when her body is dancing among the ruins in Japan.

I had a remarkable insight into this when I was visiting Grounds for Sculpture in Trenton, NJ last weekend.  I was looking at the generally cheerful, life-like statues of Seward Johnson.  In particular, I was looking at the one he is most famous for –  a bronze statue of a business man sitting on a bench outside the Merrill Lynch offices in the Financial District of New York City.  “Double Check” depicts a man sitting with his briefcase open on his lap while he “double checks” his notes before an important meeting.  Here is what it looked like when it was installed in 1982: 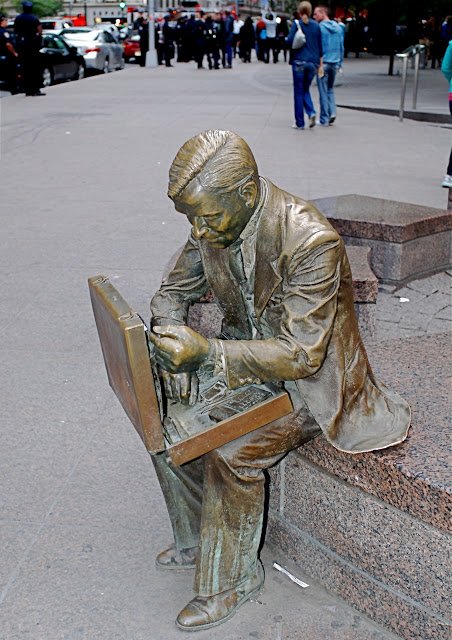 And below is what the sculpture looked like the day after the twin towers came down in 2001: 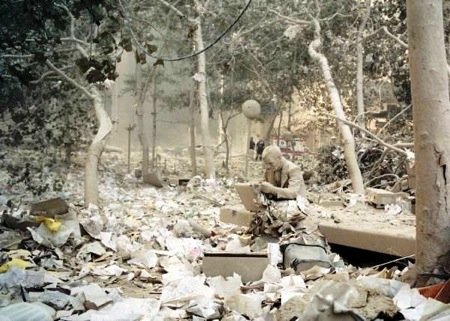 Double Check by Seward Johnson, after 9/11

He’s powdered in white ash, debris and dead trees all around, the bronze is dented and gashed. Johnson decided to make a replica of this wrecked phantom in memoriam of the tragedy and those that lost their lives:

When I saw this remake I immediately thought of Eiko’s body in the grandness of 30th Street Station, her body also covered in what looks like white ash.  What if Seward Johnson had proposed this final version in 2000 before the towers came down? Not as a premonition of an actual event but as a signal of inevitable failure.  And that is what I believe Eiko’s dance in 30th Street is – a dance of remorse and lament in advance of the fact.  Time is not even, progress is a dangerous illusion. 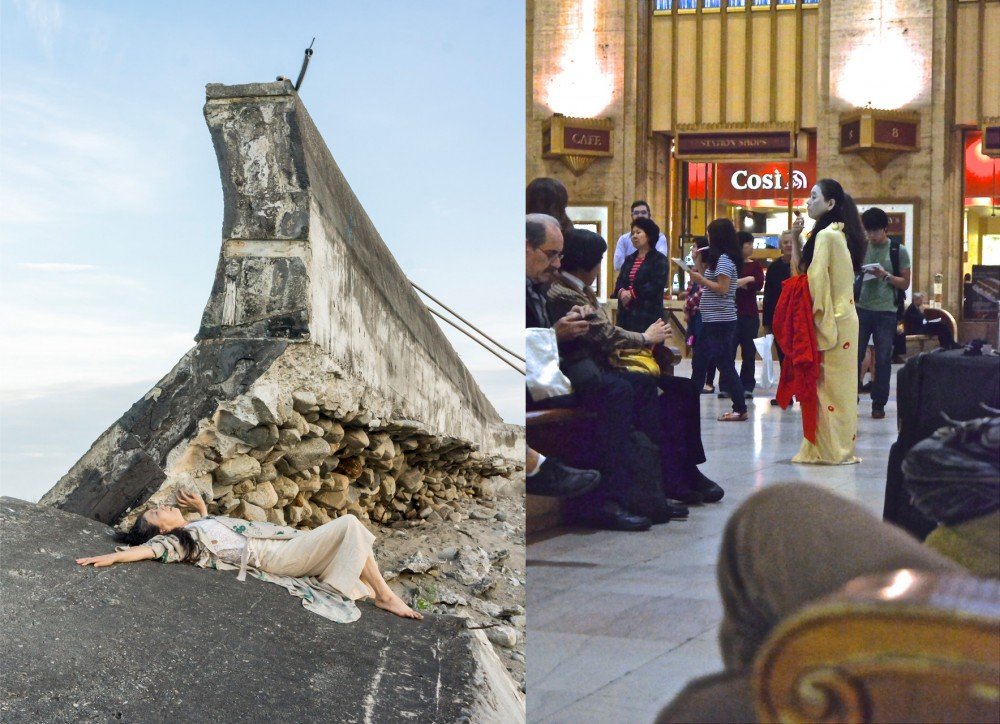 There is a tender and gentler side to Eiko’s view that time is not even.  I think it is apparent to anyone who has come to Eiko’s performances over the past three weeks.  Something odd begins to happen with time that is akin to the way moving underwater can make you think about gravity.  My own experience usually involves an initial restlessness as my attention contends with the dense world of the train station– tides of people rolling in and out, loudspeaker announcements and an endless buzz of wheels rolling and clicking, voices and echoes of echoes in the cavernous space.  And also: her still and striking presence in contrast to that ordinary, chaotic world. Then time begins to shift as I enter a different time signature.  Her work with presence triggers a response in the watcher I call empathetic seeing.  In watching her, one dreams of being slow too.  Your breath slows and your nervous system first imagines and then becomes that which is observed.  The empathetic seeing is reciprocal: you see her seeing you.  The passage of time becomes visible, tangible in the fundamental way it organizes everything into cause and effect.  And then something stranger begins to happen as time scrambles, stretches, and impossibly speeds up.

Come see what I mean tomorrow night, Friday, from 9pm to Midnight.  It will make for a perfectly tender and haunting night.